Skip to content
June 5, 2019 by Debbie behind the design No comment(s)

You see it banded around all over the internet – “award-winning”.   But what does it really mean.

Within the wedding industry there are lots of different avenues you can take to become award-winning.  But some of the practices can be a little, well, questionable.  Practices that include paying large sums to even be nominated or only giving the award to someone who attends a swanky awards ceremony.  I know these events need to be paid for but you should attend the awards ceremony because you want to, not because you feel the need to contribute to the bribery and corruption of such a scheme.  Not every small business has the budget to even think about entering such awards so they are already disadvantaged.

And don’t get me started on the popularity contests.  You know the ones – the posts on FB that say “I have been nominated for an award, would everyone please vote for me”.  So those that have a large circle of family/friends and are just cheeky enough just to ask come out on top.  The majority of those votes will be from people who have never even used the service.

To be honest, I have never been particularly impressed by the claims of award-winning companies and it has certainly wouldn’t be my sole reason for choosing a service.  I much prefer to do my own homework and make an informed judgement.  I certainly didn’t think I would be someone who would put much stall into being an “award-winning” wedding cake designer myself.  That was until I was nominated for the NOEWA in 2015 (my first year of full-time business).  Run by the Wedding Guide UK, Liz initially established the wedding awards as a way of recognising the support she had received from the industry through a difficult period and to pay something back.  Votes can only be cast by actual couples within a set timeframe and any votes that fall outside this criteria are disregarded.  Points are awarded on a series of categories including communication and value for money and the numbers totalled.  This final total is then divided by the number of votes cast for each company – this means that it doesn’t matter if you have the highest or lowest number of votes. Everyone is on a level playing field.  I didn’t win it that first year but was very lucky to be the winner in 2016.

Winning was an amazing feeling.  But I can honestly say that at that time, it made little difference to my business.  I certainly didn’t feel the need to enter again.  That was until this year when someone nominated me for another award – the I Do Wedding Magazine awards.  I am still unsure who my anonymous nominee was but I do thank them so very much.  The voting criteria for these awards was exactly the same – past recipients of your service within a particular timeframe.  Now, being quite an introvert, I don’t like to beg for votes or put myself into the spotlight.  But over time I have realised that if I don’t push myself forward, no-one else is going to do it for me.  So I emailed all last year’s couples to ask if they would take the time to vote.  Many emailed back to say that they would vote without question.

I reluctantly attended the awards ceremony on 14th May, wishing that I had not agreed to go with an industry friend.  My inner introvert would much rather have been watching it at home on Facebook Live in my pyjamas.  I certainly didn’t have any thought of winning.  But that is exactly what happened.  So this time I decided to make the most of my good fortune and maximise its PR potential.  I also felt that I owed it to all those lovely couples who had taken the time to vote for me.  So I contacted the Huddersfield Examiner to inform them and within 3 days had a really lovely online article written about me (you can check it out on our Press page).    This then led to a YouTube interview on Yorkshire Voice.  Since then I have had some lovely comments on FB and Instagram and a consultation booked by someone who saw the article.

But what it really means for me is an immense sense of pride.  Pride in my abilities as a cake storyteller and that I was able to add a bit of extra pizzazz to their big day.  Pride that these couples thought enough of me and my service to take the time to vote.  Pride that even as a complete introvert, I have been able to build a business that attracts such wonderful customers who make the whole process worthwhile.  So it is for them that I have jumped on the PR opportunities – I feel I owe it to them.

So is it worthwhile being award-winning – damn right it is!!!!!

If, like me, you struggle with being an introvert in business, I have just listened to an amazing podcast by Suzi Witt at Pretty Witty Cakes.  I may blog about this another time but it has certain made me realise that I cannot and should not have to change what I naturally am.  I just need to learn to embrace it and attack things in a slightly different way.  I am in no way affiliated with this podcast – I just resonate with everything she says. 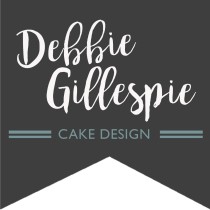 About the Debbie behind the design

I am an award-winning wedding cake designer, self-confessed Star Wars geek, lover of sushi and the Big Bang Theory. I spend my days in my cosy Huddersfield workshop, singing along loudly to Radio 2 and creating edible works of art, with a large emphasis on floral design, natural inspiration and handpainting.